At the 100th anniversary since black holes were first postulated to exist, the University of Nova Gorica received the honour of organizing the first major meeting of the International Astronomical Union in Slovenia, titled: “New Frontiers in Black Hole Astrophysics”. More than a hundred of world renown experts in astrophysics will take part in the week long meeting and will be welcomed to Cankarjev Dom in Ljubljana on September 12th, by the Minister of Education, Science and Sport, Dr. Maja Makovec Brenčič. Numerous events for the public will accompany the Symposium. Among them, a public talk on the fascinating discovery of gravitational waves will be given by Prof. Sheila Rowan, the Director of the Institute for Gravitational Research at the University of Glasgow, on September 14th, exactly one year after the first signal was ever observed.

Black holes, a prediction from Karl Schwarzschild’s solution of Einstein's field equations in 1916, were originally considered to be an esoteric, abstract mathematical concept. Today, thanks to five decades of technology development across the electromagnetic spectrum, supermassive black holes are accepted to lie at the heart of all bulge-dominated galaxies, new stellar-mass black holes are discovered every year in the form of Gamma Ray Bursts and the search for intermediate-mass black holes continues.

IAU Symposium 324: “New Frontiers in Black Hole Astrophysics” will bring together world-leading experts working across the interface between observational and theoretical astrophysics, theoretical physics and particle physics, who share a common interest in black-hole driven systems. Main topics of discussion will be the current state-of-the-art in studies of black-hole driven accretion, jet formation, acceleration, and emission mechanisms (i.e. source physics) and black-hole systems as astrophysical tools to test current theories of gravity and elementary particle physics in and beyond the standard model.

Leading up to major new facilities such as the Cherenkov Telescope Array, the Large Synoptic Survey Telescope and the Square Kilometre Array coming on line from 2018 onwards, this symposium will provide a stimulating environment for a new generation of astrophysicists to connect with, learn from and present their work to a unique and diverse combination of world-leading astrophysicists and physicists with a common interest in black holes and their applications.

This symposium is timely both scientifically and in terms of upcoming technology whose advances across the electromagnetic spectrum and beyond to multimessenger signature such as gravitational waves and neutrinos are coming of age.

2. Gamma Ray Bursts; their physics and use as probes of elementary particle physics

Contact: This email address is being protected from spambots. You need JavaScript enabled to view it. 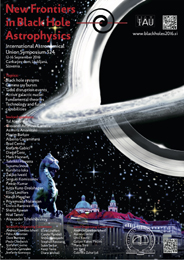